Posted on January 9, 2020 by Society for the Study of Symbolic Interaction - Blog

In Courting the Community, Christine Zozula draws on ethnographic data gathered during her fieldwork at Greenville Community Court (GCC) to examine the relationship between culture, organizational legitimacy, and punishment. Erin Reinisch (University of Nevada, LAs Vegas) has reviewed Zozula’s book and argues that “in a time where the notion of community is shifting due to the mediating forces of technology, political polarization, and impersonal bureaucratic institutions, community courts offer enticing promises that, as Zozula illustrates, they are ill‐equipped to fulfill”.

Posted on January 7, 2020 by Society for the Study of Symbolic Interaction - Blog

Recently, Scott Grills and Robert Prus published their book “Management Motifs” that Dawn Norris reviewed for Symbolic Interaction earlier this year. Scott Grills now has published an article in our journal titled “Understanding Everyday Life: Generic Social Processes and the Pursuit of Transcontextuality” that continues the argument made in the book. By drawing on a series of ethnographic research projects , Grills offers a research agenda for engaging GSPs transcontextually. Specifically, he argues for extending the study of GSPs through the examination of management in everyday life, the creation of subcultural value, and the social construction of doubt. 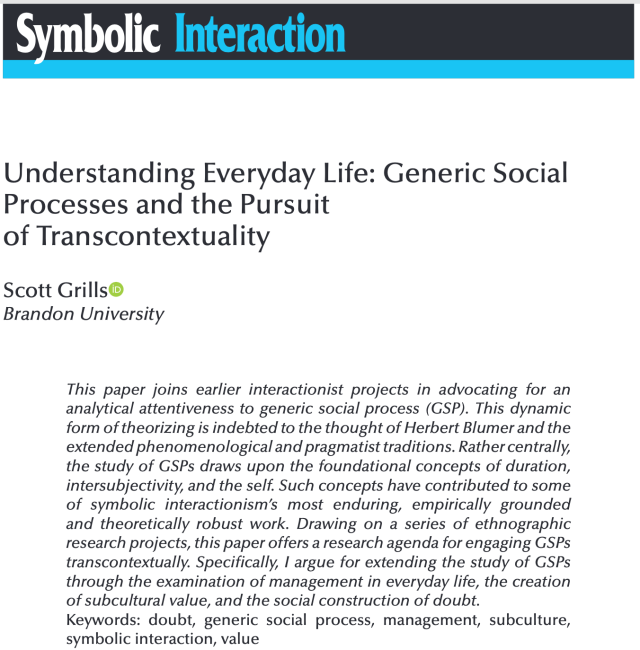 Posted on December 18, 2019 by Society for the Study of Symbolic Interaction - Blog

Leslie Irvine very known for her research on human-animal interaction has reviewed two books concerned with the relationship between human and insects.

She argues that Anne Sverdrup-Thygeson and Sergey Govorushko in their books “remind readers that insects do not exist solely to serve our interests. They have evolved to engage in what many people consider uniquely human activities, including agriculture, warfare, the division of labor, slavery, a caste system, architecture, and symbolic communication”.

New Article: “The Spirit of Blumer’s Method as a Guide to Sociological Discovery” #sssi #Blumer #sociology

Posted on December 16, 2019 by Society for the Study of Symbolic Interaction - Blog

In this article Michale Schwalbe explores Herbert Blumer’s methodological contribution to interactionism and sociology. Schwalbe argues that Blumer’s essay “The Methodological Position of Symbolic Interactionism” “voices a spirit of research that is ardently empirical, sociological, and creative”.

Michael Schwalbe’s article has just been published on Early View of Symbolic Interaction. SSSI Members can download the article by clicking the image below or HERE. To join SSSI and subscribe to Symbolic Interaction from $35 (£30) please click HERE.

Posted on December 12, 2019 by Society for the Study of Symbolic Interaction - Blog

If you had dementia, would you tell people? This question is at the heart of my new paper in Symbolic Interaction, focusing on how couples with dementia negotiate impression management and the presentation of selves.

Among the many challenges that dementia presents, those affected can struggle to navigate the perceptions of other people. This is particularly challenging when couples disagree over how they would like to be seen by others. In my study, people with dementia wanted to conceal their diagnoses from other people, but carers wanted to be more open. People with dementia adopted various strategies for concealing their dementias, but as cognitive decline progressed, it became harder to hide. They became increasingly reliant on their carers to support their performances, and as carers gained greater influence, impression management shifted toward their preferences. This creeping inequity was made more problematic by symbolic and institutional responses to dementia, exacerbating tensions.

Diagnosis was one example of this. Diagnosis was typically driven by the carer, sometimes against the wishes of the person diagnosed. Discrepancies in the desirability of diagnosis reflect the different ways that diagnosis works for those affected. Participating carers described feeling validated by diagnosis and eliciting sympathies from others. There were also practical benefits, such as free gym classes and extra-fast car breakdown services. Conversely, participants with dementia were ashamed of having such an infamous condition, and suffered institutional disadvantages such as having their driving licenses revoked. Dementia placed everybody in unenviable positions, yet while diagnosis offered carers some meagre benefits, it compounded the situations of those with dementia.

This intensification of tensions in couples with dementia is important in the context of campaigns to promote diagnosis and awareness. Without effective treatments, the merits of this strategy depend on societal responses to dementia. In an ideal world, diagnosis would lead to services rather than shame, giving couples less reason to contest how best to engage with dementia. I hope this paper helps readers to reflect on the problems faced by couples with dementia, and to consider how we might ease some of them.

Posted on December 11, 2019 by Society for the Study of Symbolic Interaction - Blog

Carley Geiss (University of South Florida) won the 2019 Couch Award for her
work, “Exploring Cultural Conventions of Compassionate Healthcare through
Virtual Narrative Ethnography.”  In this study, Geiss illustrates how
public organizational narratives about compassionate healthcare reflect and
reinforce cultural systems of meaning.  Using virtual narrative ethnography
of Schwartz Center of Compassionate Healthcare, Geiss demonstrates the
construction of a formula story that operates through (1) characterization
of the “compassionate-worthy patient,” (2) a plot of empathetic connection
and compassionate action between patients and providers, and (3) morals
that communicate personal, clinical, and institutional benefits of
compassion in healthcare.

Couch Award is an annual competition, open to students who submit papers
that (1) use a symbolic interactionist approach inInternet studies, (2)
explore the interface between deliberate social interaction and structured
(or automated)interactions sponsored or enacted by various technological
features, and(3) examine not only how identities, relations, and social
formations are negotiated through social interactions, but also how these
interactions are mediated further through the use or capacities of various
technologies.

Posted on December 10, 2019 by Society for the Study of Symbolic Interaction - Blog 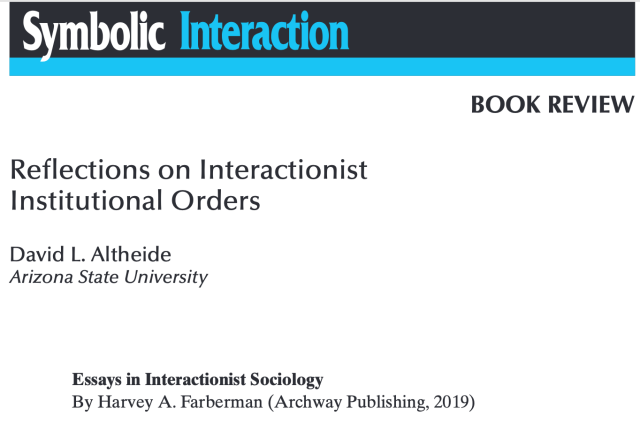